Did you know that there are people who have to flee from their home countries being threatened for who they are and for who they love rather than religious persecution or war? In Europe there is little awareness to these people – some of them are sent back, not seldom to death.

I initiated this project and connected photographers, journalists, designers but also foundations to publish a magazine which includes 23 written and photographic portraits of LGBT* refugees living in Bavaria. Additionally, I organised various events including readings, lectures and performances to draw attention to those important issues.

Rainbow Refugees (Stories) tells the stories of 27 LGBT* refugees who are persecuted in their home countries because of their sexual orientation or identity.

This is a cooperation with Presseclub München and Sub - Schwules Kommunikations- und Kulturzentrum München e.V.

How it all started

The idea for the project emerged in summer 2018 when I met a group of LGBTIQ refugees in Munich.

I had invited them to a spontaneous portrait shooting. I was very surprised about their great interest and asked myself what kind of life stories the portrayed people have. 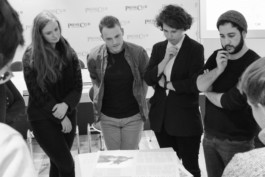 Collaborate in a team

A group of journalists,photographers and designers quickly got together to work on the realization of the magazine.

We had the support of Presseclub München, which provided us with both with the space and the conditions for sponsoring.

A series of events

An important part of our project is the interaction and communication to the public.

At several events we inform about the magazine and thus the issues of LGBTIQ refugees. Readings, interactive talks and have emerged as good tools.

There’s also a possibility to get one of the magazines.